Morning calls early. Woke up at 5:00am to leave for the Sea-Tac airport. My flight leaves at 7:20am for Salt Lake. We were running a bit behind so I got to the airport at 6:40. You know those times where you sweat getting through security and making it to the gate. This was one of those times. We actually leave on time which was great. The flight has a short stop in Salt Lake City and then makes it way to Atlanta. I arrived early in Atlanta.

A bunch of my fraternity brothers all met up at the Vortex in mid town Atlanta.

I have to say you’d be hard pressed to find a place with a better beer and burger selection in town. The Ragin’ Cajun with chili was the item of the evening for me and it did not dissapoint. Plenty of spice to light any mouth on fire! The skeleton on the bike was a nice touch. It was good to see everyone again. After the Vortex, most of us went out to a bar in Buckhead, but for the life of me I can’t remember what it was called.

Saturday was a great day to kick back and enjoy being home. Todd, a close high school friend is getting married today. The wedding was over at First United Methodist in Marietta. It was fun to see he and his family as well as friends from college. On the way to the wedding I finally came across “The Big Chicken”. I’d heard so many times about it growing up, but have never seen it. Well, some 25 years later it’s surprisingly underwhelming as a landmark: Losing three hours from California makes early mornings on the east coast, well, early. It was great to head back to Northpoint Community Church in Alpharetta, the church I used to attend in college. It’s grown to about 10,000 so I did not run into anyone I knew, but cool none the less. This shot is the final 10pct of the walk to the building. it’s a massive place. The do a great production as well 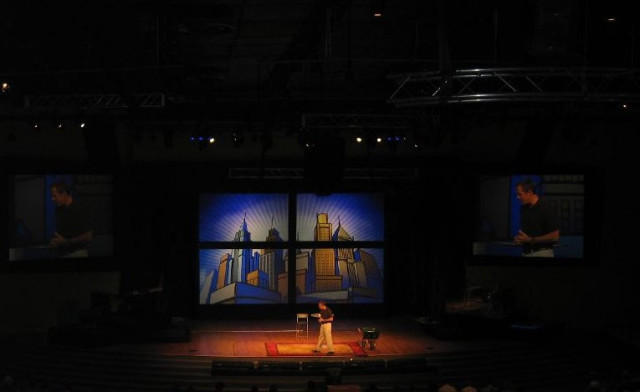