The key fundamentals of photography are exposure, focus, and depth of field. All of the variables such as shutter speed, ISO, and aperture all manipulate these three things. In this article, I’m going to be focusing on exposure. Whether using a film or digital camera, the basic art of photography is exposing a piece of sensitive media with light. As the medium is exposed, it transitions from black to white and various brilliant colors. Let’s take a look at three photos. One will be underexposed, one correctly exposed, and one overexposed. It’s easy to see which image is correctly exposed. It’s the one that mirrors what we’d expect to see in real life. There are an amazing amount of possibilities to deliberately under or overexpose a photo. When exposing film, two major variables are at play: the film speed, the aperture, and the amount of time the shutter is open.

The faster the ISO, the less time required to achieve exposure on a particular shot. ISO speeds range anywhere from 50 to over 200,000 on the latest digital cameras. Why not just have a high ISO speeds? The higher the ISO, the more grain in the photograph. Low ISO speeds produce rich and vibrant color. As the ISO speeds rise, areas of consistent color will appear grainy. One of the big advantages of having an SLR camera is that they manage grain significantly better than point-and-shoot cameras. At ISO 800 images from my point-and-shoot camera were unusable. With the SLR camera, they come out wonderfully. In general, use the slowest ISO speed you can.

Let’s take a look at automatic mode. How does the camera assess what shutter speed, aperture, and ISO speed to use when taking a photo? The answer is in a term called metering. Metering is the process by which the camera assesses the available light to see what type of photo it thinks you want. The key terminology is “it thinks you want.” Camera manufacturers generally assume that light will be somewhat distributed throughout frame. For most photographs, you’ll get a decent result. However, what if light is not distributed equally throughout the frame?
On my camera, there are three different metering modes. That means the camera looks for light in a few different ways depending on the setting.

I was invited to photograph the Oakland East Bay Gay Men’s Chorus production of “Pleasure an Pain.” As with any event, the light was dim in the venue so I didn’t have much understanding as to how the end photographs would come out. I have to say, I was extremely happy with the results. Spot metering was what did the trick. I was shooting with a Canon 5D Mark III  using the 24 – 105 f/4 lens. At first, I was a bit aggressive with the ISO speed at 3200. As the show went on, I was able to cut that speed in half and still have good results at ISO 1600. Let’s take a look at some of the photographs:

Jeremiah Selvey, the conductor for the chorus.  His photo was one of the first few I took.  I uses spot metering on his face. The camera then kept most of the background dark.  Had I not used that mode, the camera would have made the background neutral and overexposed Jeremiah.

The full chorus before the show.  Concert lighting often strays far from what the camera considers normal, so setting white balance can be a challenge. 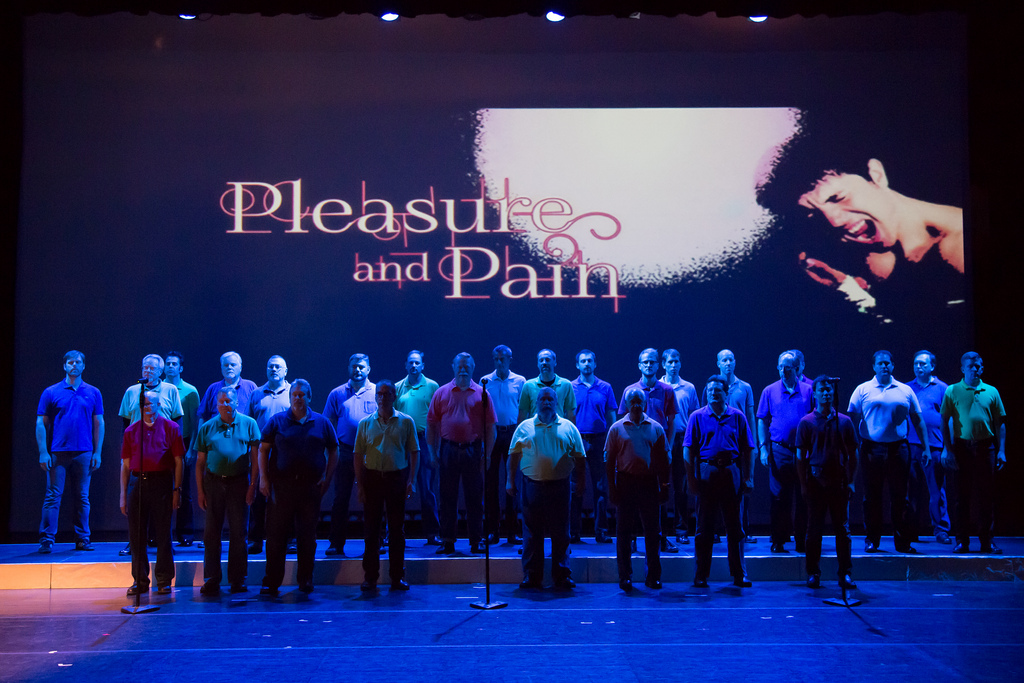 As people moved around on stage, getting the focus and metering point became more challenging  The shutter speed needed to be faster than 1/80 to avoid motion blur. When taking photos when the light is colored, remember what’s actually white in the scene.  I keyed off the singer’s undershirt to set the white balance back in line to help the color appear more natural. Post processing can help correct any imperfections when taking the shot.  Since the singer’s jeans are pretty dark, it would be easy for them to get lost in the background. Spotlights can create natural vignettes that work really well in your photographs.  You can see this in the first photo, but it’s not in the second one. Be ready when lots of light comes out on the stage.  More light means better photos and less work in post processing. 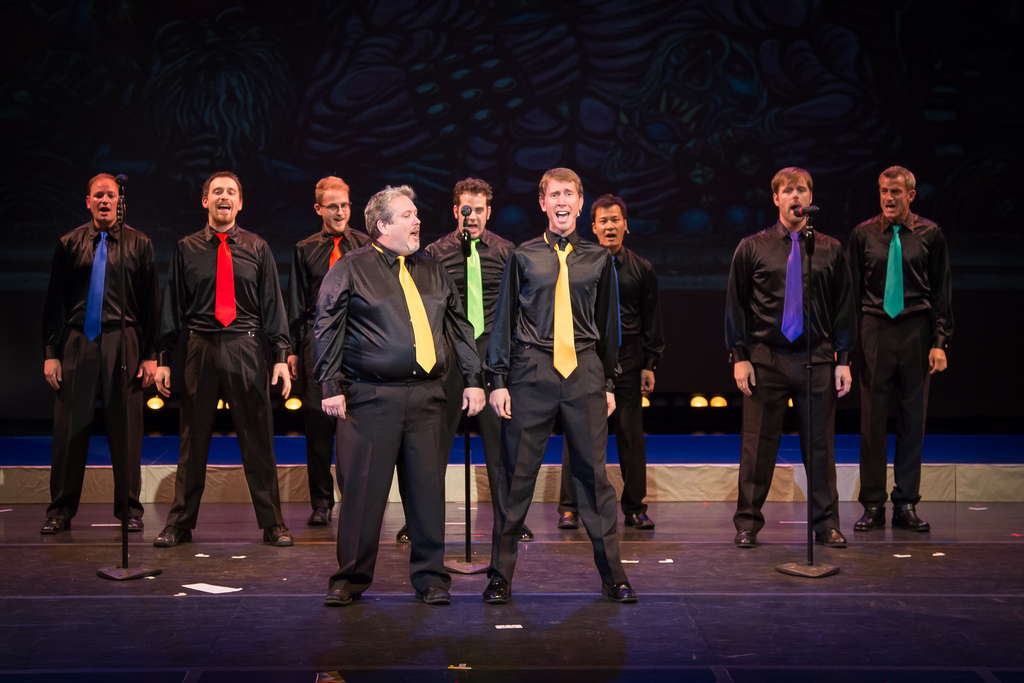 Sometimes though, the light just doesn’t work.  Before tossing the photo, convert it into black and white and play with the color.  I didn’t like the color version of this photograph, but I do like the black and white one. 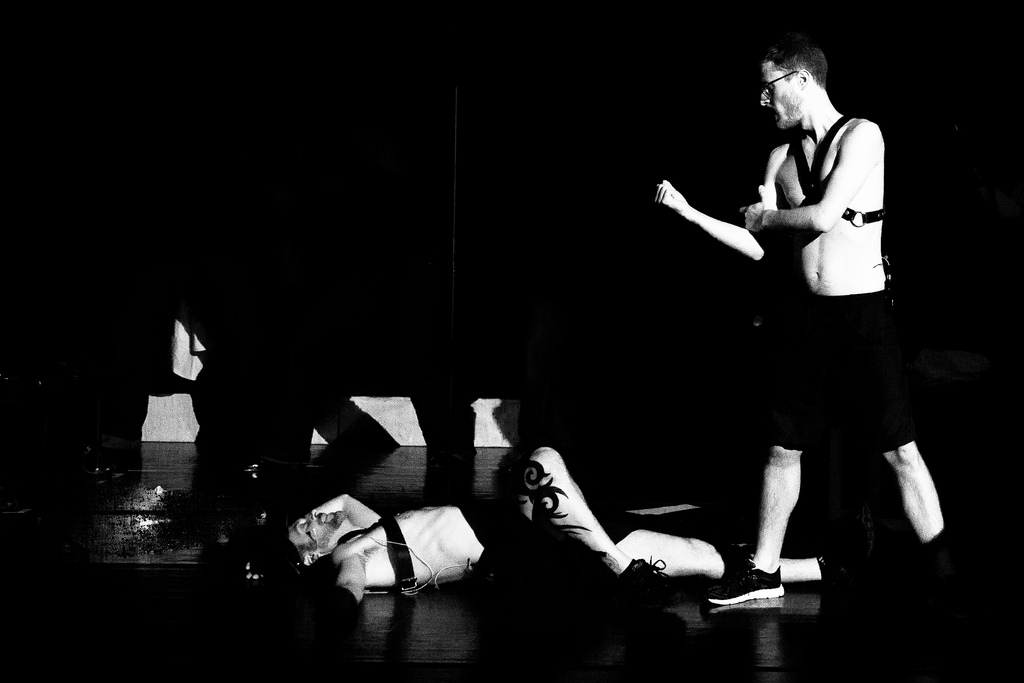 Next Steps: Find a community event in your area like an open mic, theater production, or comedy show. If the event doesn’t allow photography, contact the show organizer to see if you can take photos for their benefit. That way, you get the experience and they get the photographs.
37.804364-122.271114