Starting off in print photography, I learned that the standard photograph here in the States is 4″ x 6″. Just about every film camera takes images in that aspect ratio. The prevalence of digital cameras and digital media changed all that. Photographers are less bound by fixed print sizes and thus can be significantly more creative when displaying images.

@anelissacs first exposed me to panoramic photography in 2007. Panoramas are the large-format images that capture an entire landscape in a long, rectangular format. Ten years ago, panoramic photography was fraught with calculations, specialized software, and a little bit of luck to get it right. Today, taking a panorama really comes down to moving your phone across a landscape.

Obviously, there’s more to it than just that – but it’s significantly simpler than it used to be. What does panoramic rendering software do? It’s a couple of key things:

To test these functional areas, I took three approaches on my iPhone X to taking the same panorama. I used DMD Panorama, the built-in app from Apple, and still images captured manually and rendered with Autopano Pro on my Macintosh. Each approach had its strengths and drawbacks.

After Google acquired Cloudburst and killed their panorama product there was a definite vacancy in the space. I recently found DMD Panorama on the app store and was excited that it might replace Autostich by Cloudburst. DMD Panorama makes taking the images easy. Tapping the screen activates the panoramic mode and you move the camera left to right keeping the yin-yang icon in alignment. When the two icons touch, the camera fires and the icons reset again allowing you to keep moving the camera. I recommend upgrading to the HD option as well as saving the source images to the camera roll. That way you have them later for processing on your desktop.

I discounted Apple’s native application as it was significantly different from what I was used to. It appeared that the Apple app took images from a video stream and merge them together into a static image. I was skeptical that the quality would be near what a still camera could generate with multiple images.

The Apple app has the added advantage that it can take vertical panoramas. Just turn the camera 90° and move upwards rather than to the right. It suffers in that it can’t take multiple rows in a single panorama. You are limited to one linear swipe of the camera.

Autopano Pro Is the most flexible and does the best job of any of the applications. It will take images from any camera (including that SLR which doesn’t get any use because it’s too big and heavy) and render them in a high-quality image.

When I use my SLR camera with Autopano Pro I get the best results. I can control every aspect of the development process from control points, to blending, cropping, etc. Autopano Pro lost less of the image due to cropping issues. Note, I took the defaults on all steps of the process. I could likely do a little bit better if I dug deeper into the software.

The challenge comes in that Autopano Pro is a paid product (€99) and complicated to use. It’s too much for many of the formats we distribute images commonly today: Facebook, Instagram, email. If I was printing and framing the image I would not go any other way.

This test is not definitive by any stretch as I only used one image across all three applications. I hiked up to the top of one of the local ridges to take in the view. The sun was behind me limiting the exposure range of the scene. There were no people or moving objects to account for. There was consistent color in large bands across the scene. There were no lines that needed to be rendered across images. This test is about as easy as it gets.

The results honestly surprised me. DMD Panorama (even in high definition mode) came in last. When viewed up close, its panoramas had significantly more grain and didn’t have the resolution the other solutions did. That being said, the option to capture pictures for use in Autopano Pro was outstanding. I would use it for that sole purpose.

In terms of final image quality, the Apple app and individually taken images sewn together an Autopano Pro were just about the same. What it did tell me though, is that the Apple app is better than DMD Panorama for quick images distributed by text, email, or social media. 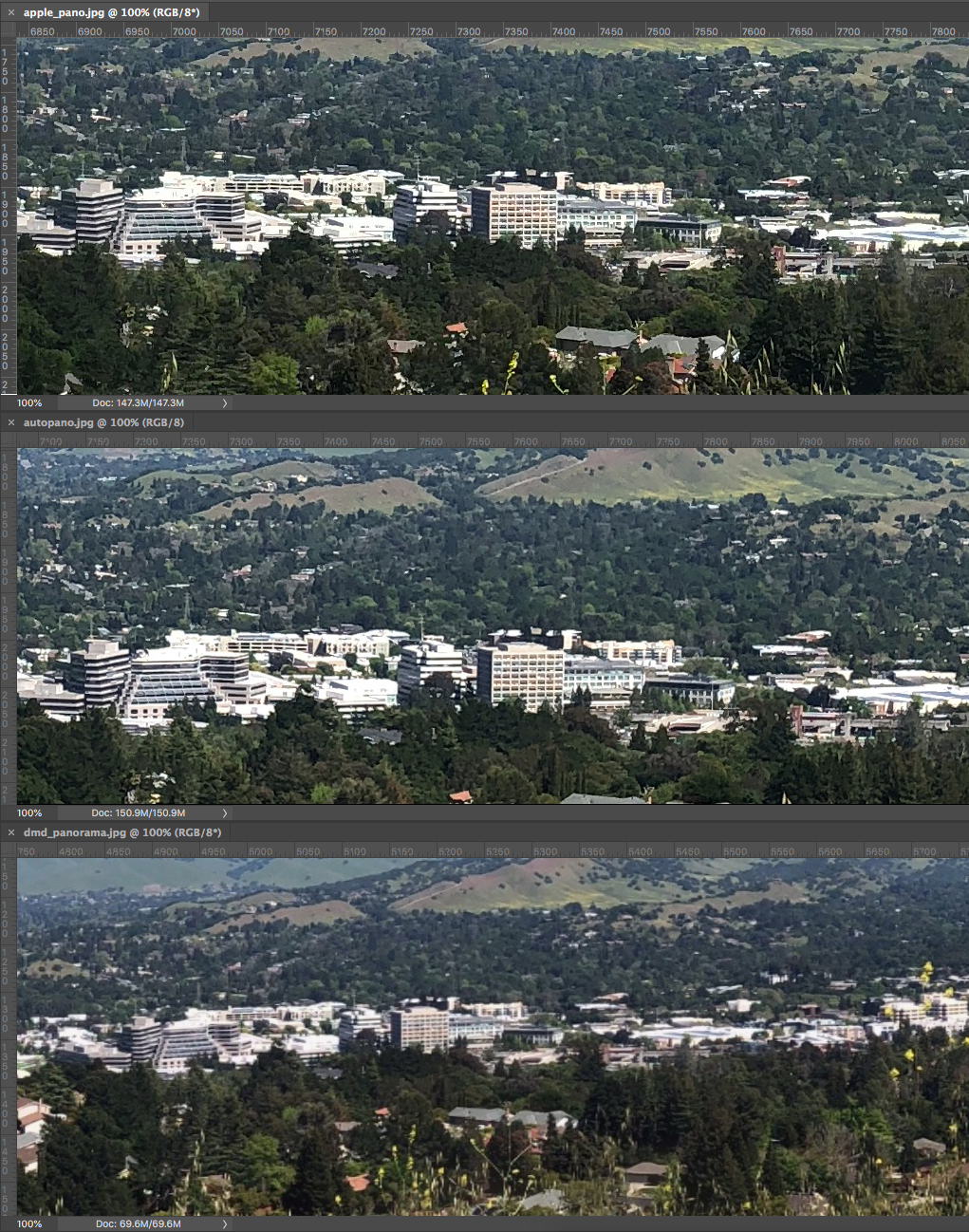 What’s the bottom line? If you’re a casual photographer with panoramas, save your money and use the Apple app. If you think you will do manual stitching of your images in Autopano Pro, it seemed to be a dead heat between the Apple app and Autopano Pro.

If the exposure value across the image varies wildly, use the camera in Lightroom for iOS to fix your exposure value and take a raw photograph.  You can see many of those images in Easter Sunrise. How I took those images, however, is a topic for another entry.